Rugby has the highest risk per player/hour of injury of all sports. The shoulder comprises 20% of all rugby injuries being the second most commonly injured joint after the knee. 35% of all injuries of the shoulder are recurrent injuries and if a player has sustained an injury of one shoulder there is a higher likelihood of that player sustaining an injury of the other shoulder. The manoeuvre most strongly associated with shoulder injuries is the tackle accounting for 49% of injury episodes in rugby matches.
The shoulder itself mechanically is an inherently unstable joint. Traditionally we think of the shoulder as a seal sitting on an unstable platform and balancing a ball on its nose. The unstable platform being the scapular thoracic joint and the seal balancing the ball being the gleno humeral joint. In rugby players this inherently unstable situation is stabilised significantly by well developed surrounding musculature; thirteen muscles make up the shoulder joint and this biomechanical protection provides a significant stability and protection to the vulnerable and potentially unstable glenohumeral joint. Another part of the important stabilising affect comes from the chuck block affect of the labrum; in well muscled rugby players this becomes the weak point in shoulder injuries.
From our clinical reviews of treating 211 elite rugby players over 6 years, we have been able to collect a lot of unique data, develope a much better understanding and refine our techniques and outcomes in this unique high-demand group of athletes. Aspects of this data have been published and presented. click here
In this article I will describe a set of unique injury patterns sustained by rugby players to their shoulder which I have come to term “The Rugby Shoulder“.

Looking at our data in 2008, we found that there were two common mechanisms of injury: 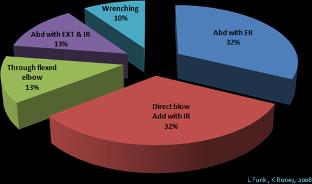 Interestingly, the number of true dislocations was small, but the number of labral tears was very high, suggesting subclinical subluxations. It is likely that the large muscle bulk prevents complete dislocation in rugby players in the majority of cases. The true dislocations were in the ABER group and this group had more Bankart lesions and partial cuff tears. There was also a very high incidence of bony Bankart lesions (26%). This is much higher than seen in other age-matched groups with traumatic shoulder dislocations. We have reported on this in a seperate study – click here. The Direct Impact group sustained a complex pattern of shoulder injuries, with a highfrequency of SLAP and posterior labral tears. Players reported at the time of injury the feeling of a pop, a dead arm feeling and inability to continue playing that game. Thereafter they often were able to return but not to the same level of play. They have lost confidence in their shoulder, avoiding tackle on the affected side. Clicking and clunking was a common symptom. Another very common symptom was that of pain with bench pressing. The pain was felt particularly on descending or eccentric loading of the biceps.
The typical history of this rugby shoulder therefore was a big hit involving a tackle or a fall onto the shoulder or a direct blow. There was big pain at the time of injury and they were unable to continue the match. The recovery after the injury is stormy and slow with great difficulty performing resistance weight training activity of the shoulder. 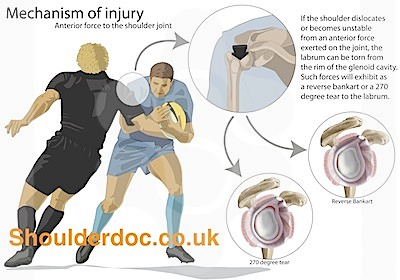 In 2011, we undertook a video-analysis study to better define the mechanisms of injury in rugby. The details of the study were presented and can be seen here.
The commonest causes/mechanisms were defined as the ‘Try-Scorer’, ‘Tackler’ and ‘Direct Impact’ mechanisms. Another less common, but significant cause of posterior capsulo-labral injury was the ‘Elbow-Fall’, landing heavily on a flexed elbow and shoulder.

‘Try Score’ injuries are caused by hyperflextion of the outstretched arm such as when scoring a try. It involves a lever force on the Glenohumeral joint, resulting in rotator cuff tears along with Bankart and anterior capsular tears. The ‘Tackler’ injuries is characterized by extension of the abducted arm behind the player whilst tackling. This mechanism involves a lever force on the glenohumeral joint (GHJ) and can cause GHJ dislocation with Bankart, reverse Bankart and superior labrum anterior-posterior (SLAP) tears. We found that the most common injury sustained was a labral injury making up 42% of all the shoulder injuries. Rotator cuff tears only comprised 4.5% of the injuries presenting to our service.

The labral injury patterns found were complex and much more severe than found in similar injuries sustained by non-rugby players. The injury patterns differed between the two mechanisms above. This is summarised below: 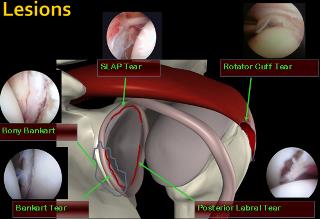 The site of labral tears demonstrated a significant different distribution to that reported in other studies of labral tears. This also differed between the two mechanisms, as shown in the image below: 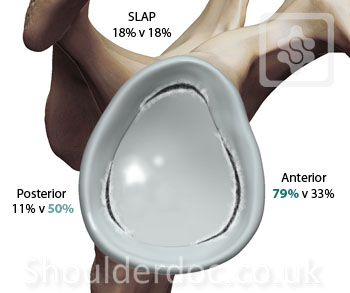 In rugby union there was alittle difference in the injury patterns, except for bony Bankart lesions were significantly more common in the backs. This is probably because they sustained more ABER injuries consistent with the open play and more outstretched tackles and score trying than the forwards.
Clickfor Graph

The majority of the players sustaining a ‘Rugby Shoulder’ injury were unable to return to the pre-injury level of play and required surgical repair. Surgery tended to performed early or mid season in 64% of the players and towards the end of the season in36%.All procedures were arthroscopic, except for 16 cases which were open modified Latarjet procedures for glenoid bony deficiency. These cases also had any associated injuries repaired arthroscopically prior to the modified Latarjet procedure.
After surgery we use an accelerated rugby rehabilitation protocol that we have developed with professional rugby teams. We work closely with the team therapist, conditioning coaches and coach to ensure a safe and rapid return to play. These athletes get a level of support and input that is not available to amateurs and therefore can be progressed more rapidly. Tissue healing is also rapid in athletes.
The rehabilitationis based on functional movement patterns and incorporates early sports-specific exercises. A sling immobilizer is used for less than one week. The first three weeks comprise of closed kinetic chain exercises which incorporate proprioception, core stability and scapula stabilizing exercises. These are done within the safe zone and progressed as tolerated. Pertubation training is introduced after three weeks and functional open chain exercises introduced. Depending on the athletes’ progress, resistance exercises are introduced after approximately six weeks, along with skills training. Simulated tackling is started at about two to three months. Impact and tackle bag training is not started until the athletes have achieved satisfactory movement, strength, isokinetic and proprioceptive criteria.

We do not put a specific time restriction on return to play. The player has to meet specific progressive goals to progress in the rehabilitation proccess. These goals are both sport and psition specific. A player cannot progress unless he has achieved the predetermined goals. The decision to progress is mainly led by the club therapist, in dicussion with myself. Return to full play is then a natural progression of recovery rather than a time-determined event.
Looking at their return to previous maximum level of play, 89% were able to return at 3 months, 94% had returned at 6 months.The average time to return for all surgery was 4 months overall. 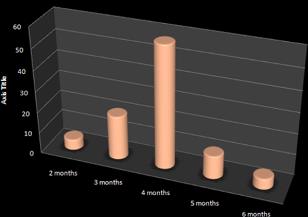 The more significant the injuries and larger the repairs, the longer it took to return to full match play. This is demonstrated below :

In summary, the typical ‘big hit rugby shoulder’ involves a big hit, big injury, unable to return to previous level of play, unusual distribution of labral tears without a true dislocation. These generally require early fixation. The results of surgery show a >90% return to full activity within 6 months. 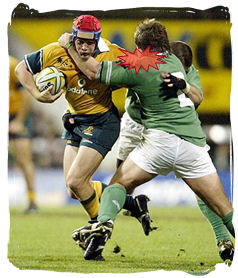 The next type of ‘rugby shoulder’ is what I term the ‘Grumbling AC Joint’. In our review of the rugby shoulder injuries, the second most common shoulder complaint was AC joint pain, making up 28% of our population. The typical history is that of repetitive minor injuries to the shoulder. Pain is felt with extreme overhead activities. Clinically the Scarf or cross-chest deduction test is positive, tenderness over the AC joint itself as well as AC joint compression test being positive. The pathological findings are varied from meniscal tears of the AC joint to AC joint arthritis and Osteolysisof the lateral end of clavicle.
Arthroscopic AC joint excision was undertaken where required.
Our results of 12 professional rugby players, over the one year period, revealed a mean return to play of 6 weeks following AC joint excision. However it is worth noting that 10 of the 12 were done at the end of the season, only 2 done mid season. With this type of injury players are normally able to play through the season with the aid of physiotherapy and AC joint injections, often attending for their surgery at the end of the season. The initial treatment in-season is injection and rehabilitation with plan to perform AC joint excision at the end of the season, if required.

WE’D LOVE TO TREAT YOU

WE’D LOVE TO TREAT YOU

We use cookies on our website to give you the most relevant experience by remembering your preferences and repeat visits. By clicking “Accept All”, you consent to the use of ALL the cookies. However, you may visit "Cookie Settings" to provide a controlled consent. Read More
Cookie SettingsAccept All
Manage consent

This website uses cookies to improve your experience while you navigate through the website. Out of these, the cookies that are categorized as necessary are stored on your browser as they are essential for the working of basic functionalities of the website. We also use third-party cookies that help us analyze and understand how you use this website. These cookies will be stored in your browser only with your consent. You also have the option to opt-out of these cookies. But opting out of some of these cookies may affect your browsing experience.
Necessary Always Enabled
Necessary cookies are absolutely essential for the website to function properly. These cookies ensure basic functionalities and security features of the website, anonymously.
Functional
Functional cookies help to perform certain functionalities like sharing the content of the website on social media platforms, collect feedbacks, and other third-party features.
Performance
Performance cookies are used to understand and analyze the key performance indexes of the website which helps in delivering a better user experience for the visitors.
Analytics
Analytical cookies are used to understand how visitors interact with the website. These cookies help provide information on metrics the number of visitors, bounce rate, traffic source, etc.
Advertisement
Advertisement cookies are used to provide visitors with relevant ads and marketing campaigns. These cookies track visitors across websites and collect information to provide customized ads.
Others
Other uncategorized cookies are those that are being analyzed and have not been classified into a category as yet.
SAVE & ACCEPT
Powered by